Posted in Other
44 comments: Leave a reply

Pretty images and merchandise with quotes attributed to Lewis Carroll or the Alice in Wonderland books are popping up everywhere nowadays. Unfortunately, many of these quotes are misattributed: they are not from the ‘Alice’ books, nor from their author. Please don’t spread the misconception!

The internet is a blessing, but it also has a downside: funny, entertaining, motivational or spiritual quotes are shared with the speed of light, without anyone checking the reliability of the source.

People with commercial goals in mind, profit from this. They create merchandise with these quotes in the hopes that you buy them. Or they create nice looking images with quotes and post them on their social media page, hoping to get a lot of likes and shares, so their page becomes more valuable to advertisers.

There’s nothing wrong with the quote in itself – the problem is that it is being misattributed. Which causes many people to have a wrong idea about Lewis Carroll and his books.

A very common practice is combining a random quote with an illustration from “Alice’s Adventures in Wonderland” or “Through the Looking Glass and what Alice found there”. This leads people to assume that the lines can be found in the original story, while they are in fact not from the ‘Alice’ books at all.

Sellers of this kind of merchandise call this ‘artistic licence’. And there indeed is no law that prohibits them from combining quotes and images from different sources. That is, as long as they are not copyright protected.

Unfortunately, already several quotes from Disney’s Alice in Wonderland / Through the Looking Glass movies are being thought to originate from Lewis Carroll’s ‘Alice’ books. Movie quotes that are commonly confused for book quotes are amongst others:

“You used to be much more…muchier. You’ve lost your muchness.”
(Burton’s 2010 ‘Alice in Wonderland’)

“Do you suppose she’s a wildflower?”
(Disney’s 1951 ‘Alice in Wonderland’ cartoon)

I have no idea where this quote comes from (do you?), but I assume it is also from one of Disney’s live action ‘Alice’ movies:

“The secret, Alice, is to surround yourself with people who make your heart smile. It’s then, only then, that you’ll find Wonderland”

There are also quotes from the computer game ‘American McGee’s Alice’ that are well-known, but not from the original story, like:

“Every adventure requires a first step.”
(The Cheshire Cat in American McGee’s Alice)

Or from a TV series with a Wonderland character:

“You know what the issue is with this world? Everyone wants a magical solution for their problem, and everyone refuses to believe in magic.”
(Jefferson/’Hatter’ in the TV series “Once Upon A Time”)

Confusing the author of the quote

Besides merely suggesting a relation between a quote and a book, I’ve also seen many beautiful quotes specifically being attributed to Lewis Carroll. However, most of these quotes are merely in the style of his ‘Alice’ books, but were never actually uttered or written down by him. These quotes are from someone else; sometimes from another famous person, but more often from an anonymous author.

Below are some examples of quotes wrongfully attributed to Lewis Carroll:

Imagination is the only weapon in the war against reality.
(Jules de Gaultier)

In the end, we only regret the chances we didn’t take, relationships we were afraid to have, and the decisions we waited too long to make.
(from unknown)

Actually, the best gift you could have given her was a lifetime of adventures…
(from unknown)

“You,” he said, “are a terribly real thing in a terribly false world, and that, I believe, is why you are in so much pain.”
(Emilie Autumn’s novel “The Asylum for Wayward Victorian Girls”)

“But, said Alice, if the world has absolutely no sense, who’s stopping us from inventing one?”
(from unknown) 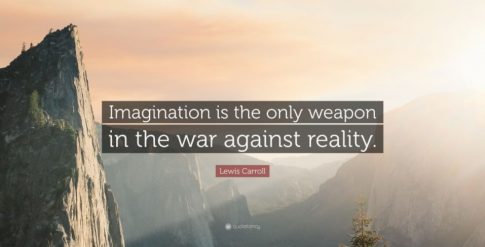 Also, there are quotes that are being wrongfully attributed to a character he created, while it never said this – not in a book, nor in a movie:

I’m not crazy. My reality is just different than yours.
(misattributed to the Cheshire Cat; source unknown)

“How long is forever?”
“Sometimes, just one second.”
(misattributed to the White Rabbit; source unknown)

When you can’t look on the bright side, I will sit with you in the dark.
(misattributed to Alice; source unknown)

The hurrier I go, the behinder I get.
(misattributed to the White Rabbit; source unknown)

There are actually complete conversations made up by anonymous people, probably as fan fiction, that are being presented as fragments from Carroll’s books – but aren’t. Like this one:

“Do you love me?” Alice asked.
“No, I don’t love you!” replied the White Rabbit.
Alice frowned and clasped her hands together as she did whenever she felt hurt.
“See?” replied the White Rabbit. “Now you’re going to start asking yourself what makes you so imperfect and what did you do wrong so that I can’t love you at least a little. You know, that’s why I can’t love you. You will not always be loved Alice, there will be days when others will be tired and bored with life, will have their heads in the clouds, and will hurt you. Because people are like that, they somehow always end up hurting each other’s feelings, whether through carelessness, misunderstanding, or conflicts with themselves. If you don’t love yourself, at least a little, if you don’t create an armor of self-love and happiness around your heart, the feeble annoyances caused by others will become lethal and will destroy you. The first time I saw you I made a pact with myself: ‘I will avoid loving you until you learn to love yourself.'”

Almost, but not quite

Finaly, there are quotes that are quite similar to lines from the ‘Alice’ books, but are not exact quotes. It is understandable that they are easily confused. A very well-known example is:

If you don’t know where you’re going, any road will take you there.

This resembles the conversation Alice has with the Cheshire Cat (“Would you tell me, please, which way I ought to go from here?” / “That depends a good deal on where you want to get to,” said the Cat. / “I don’t much care where–” said Alice. / “Then it doesn’t matter which way you go,” said the Cat. / “–so long as I get SOMEWHERE,” Alice added as an explanation. / “Oh, you’re sure to do that,” said the Cat, “if you only walk long enough.”), but is actually a line from George Harrison’s song “Any Road”.

It is a shame that these misquotations are happening, because the Alice books are full of other great quotes! You can find some actual Alice in Wonderland quotes on my site.

Another quote that actually seems to be from Lewis Carroll, is this one:

“One of the secrets of life is that all that is really worth the doing is what we do for others.”

We can find it in a letter from Carroll to his friend Ellen Terry, dated 13 November 1890: “And so you have found out that secret – one of the deep secrets of Life – that all, that is really worth the doing, is what we do for others?” (thanks to Molly Martin for pointing this out to me!)
The quote is also attributed to Levi Strauss on the web, but I don’t know if that’s true and if Carroll perhaps was merely quoting him or someone else in his letter.

Do you have any idea who the real author of one or more of the quotes listed here is? Or do you know of more quotes that are often misattributed to the Alice books or Lewis Carroll? Post them in the comments and help spread awareness!