Yesterday, the original electrotype blocks used for printing the illustrations of the first editions of “Alice’s Adventures in Wonderland” and “Through the Looking Glass and what Alice found there” were sold at auction house Christie’s.

To be able to print the illustrations, Tenniel drew on wooden blocks, which were subsequently cut by the Dalziel Brothers. From these wooden blocks, copper-plated lead printing blocks were electrotyped. 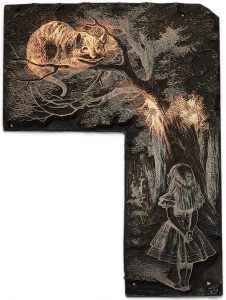 More details about the auction can be found on the website of Christie’s.

Read more about the publication process of “Alice’s Adventures in Wonderland”.