In 1951, Walt Disney released a cartoon movie titled ‘Alice in Wonderland’. It was not the most successful Disney movie, but many people remember it still.

Walt Disney always has been fond of Lewis Carroll’s books. He once said:

“No story in English literature has intrigued me more than Lewis Carroll’s Alice in Wonderland. It fascinated me the first time I read it as a schoolboy, and as soon as I possibly could, after I started making animated cartoons, I acquired the film rights to it.”
(source)

How the movie started

In 1920 Walt Disney had produced ‘the Alice Comedies’; his shorts which had given him his first success. They were about a real girl named Alice, who walked around in a drawn world. Since that time he had decided that he was going to make a film based on Lewis Carroll’s story.

Walt Disney purchased the rights to the Tenniel illustrations in 1931. He considered a live-action/animation version of the story, starring Mary Pickford as Alice, and in 1933 some color screen tests were made of her. Disney then shelved the project, because of Paramount’s 1933 live-action adaptation.

Still, Disney was not entirely put off and picked up the movie later. He registered the title with the Motion Picture Association of America in 1938 and hired storyboard artist Al Perkins and art director David S. Hall to develop the story and concept art for an all-animated film. A story-reel was complete in 1939, but Disney felt that Hall’s drawings resembled Tenniel’s drawings too closely, which made them too difficult to animate. Also, he found that the overall tone of Perkins’ script was too grotesque and dark. Because of the amount of work the movie needed and because of World War II, the project was again put on hold.

Disney seriously started producing of the movie until June 1947. He assigned British author Aldous Huxley to re-write the script. Again, Disney was not satisfied: he felt that Huxley’s version was too much of a literal adaptation of Carroll’s book. He did however like the designs of background artist Mary Blair, because they did not resemble the sketchiness of Tenniel’s illustrations and made use of bold colors. The script was then re-written to focus on comedy, music, and the whimsical side to Carroll’s book. (source)

Disney changed his mind about who was going to star in this film several times. In 1933, there was talk about the girl who had worked with Disney in those Alice shorts, starring as Alice. Then in 1945, Disney announced that Ginger Rogers was going to be the star and then a young girl named Luana Patten. Lisa Davis Waltz was also considered.

Finally, after more than 200 young actresses were auditioned, a 14-year-old girl named Kathryn Beaumont was picked to play the part of Alice.

It was also after her that Disney’s Alice was modeled, because she not only provided her voice, but she (as did several other voice actors) also acted out the role in live-action footage filmed for the animator’s reference, wearing a specially created Alice costume.

Disney recognised that due to running time constraints and continuity demands he needed to scale the story down a bit. Although he did not originally intend to cut too many sequences, he realized that many characters would have to be eliminated, or else have their screen time reduced. This is why Disney combined scenes from both ‘Alice’s Adventures in Wonderland’ and ‘Through the Looking-Glass’ for the story-line, and characters like the Griffin, the Mock Turtle, the Duchess, the Jabberwock and Humpty Dumpty (“he was too talky”) did not pass the cutting floor and were left out.

The Jabberwock scene was cut from the movie. Therefore, the Cheshire Cat’s song “I’m Odd” was also cut and he was made to sing “Jabberwocky” in stead.

He did try to create amalgams in his characters though; for example scenes of the Duchess were merged into those of the Queen of Hearts, and the Cheshire Cat was to sing ‘Jabberwocky’.

The only main character that was made up by Disney was the talking Doorknob. The Doorknob was created “in order to avoid a long explanatory monologue at the beginning of the story and to give Alice a foil to talk to.” Disney had originally given a voice and personality to the “Drink Me” bottle, replacing one inanimate object with the other with the creation of the talking Doorknob (source).

For more details, read the article “How I cartooned ‘Alice'” – an interview with Walt Disney in which he explains what problems he encountered, which decisions he made, and why, when creating the cartoon movie.

Many songs were written for the movie, most ones being based on Carroll’s poems. As with the scenes, many of these songs did not make it into the movie. On the Disney Wikia site you can read which songs were not used and which scenes were cut.

Because Sir John Tenniel’s illustrations for the Alice books were so well known, Walt Disney acquired the rights to them as the basis for the characters of his movie.

However, the complex pen and ink designs did not lend themselves to animation. Instead, the animators used the original drawings as a starting point, but gave them a Disney make-over.

It required months of rough sketches before the model sheets, which would guide the animators, were finished.

The inspirational paintings that Mary Blair created, deeply influenced the final visualization of the movie and its characters. 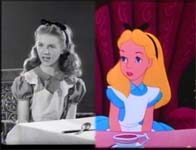 The production of Alice in Wonderland began in 1946. The film took five years to finish and it cost the studio about $3 million, partly because a full-length live action film was shot so that animators could consult it while animating the film.

Using profits from his 1950 animated success ‘Cinderella’, Disney was able to get for ‘Alice in Wonderland’ some of the top talents of the era as voice talent, the largest musical score of any Disney classic, elaborate backgrounds and visual styling (by Mary Blair), as well as Salvador Dali influenced animation sequences.

When Alice in Wonderland was finally released, however, the audiences were disappointed. They felt that Disney had failed to capture the atmosphere and intellectual humor of Lewis Carroll’s story.

Disney too was disappointed with the film and blamed it’s lack of success on Alice’s “lack of heart”. He was also dissatisfied because he still thought there were too many characters playing in it.

The only success brought about by the movie was the music. “I’m Late” and “The Unbirthday Song” were two songs that became quite popular with the public.

(Source: you can find most of this information at the Disney-site and the Internet Movie Database. Some information was also used from this site.) 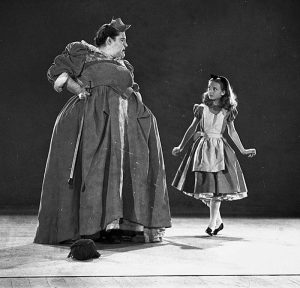 When you watch closely, you can spot some mistakes in the movie:

View pictures (screencaptures) from this movie