When Lewis Carroll wrote “Through the Looking-Glass and what Alice found there“, John Tenniel objected to a chapter, so Carroll dropped the entire episode. This chapter was called “A Wasp in a Wig”. For more than 100 years it was lost.

“My Dear Dodgson:
I think that when the jump occurs in the Railway scene you might very well make Alice lay hold of the Goat’s beard as being the object nearest to her hand – instead of the old lady’s hair. The jerk would naturally throw them together.
Don’t think me brutal, but I am bound to say that the ‘wasp’ chapter doesn’t interest me in the least, & I can’t see my way to a picture. If you want to shorten the book, I can’t help thinking – with all submission – that this is your opportunity.
In an agony of haste,
Yours sincerely,
J. Tenniel”

Tenniel also commented in another letter: “A wasp in a wig is altogether beyond the appliances of art”. Therefore, the most prevailing view about Carroll’s omission of the chapter is that Tenniel didn’t want to draw a picture of a wasp in a wig.

It could also be the case that he just didn’t have time to make another picture, because he had a Punch deadline coming up. Martin Gardner suggested that it was the Wasp’s criticism of Alice’s eyes that made the one-eyed Tenniel decide not to cooperate.

The episode was probably eliminated at a fairly late stage of the book’s production. It was presumably supposed to follow after the chapter about the White Knight, from page 183 of the original edition.

Rediscovery of the episode

Only in 1974, the episode was rediscovered.

“The episode suddenly came upon the scene in the form of a lot of galley proofs to be auctioned at a sale of manuscripts on July 3, 1974, at Sotheby’s. The lot contained six ‘slips’, or galleys, with revisions in Dodgsons own hand, and a note, also in his hand, instructing the printer to strike the episode from the book. 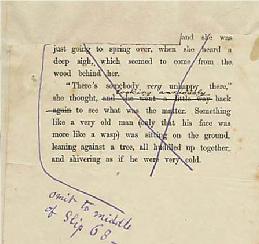 Sotheby’s sold the lot as the ‘Property of a Gentleman’, and it is not their policy to identify vendors who choose to remain anonymous. The description of the episode in the Sotheby’s catalogue tells us that ‘the proofs were bought at the sale of the authors … personal effects … Oxford 1898’. It went to a New York book dealer, John Fleming, for £1700.

Once again the episode went underground: Fleming thought it necessary to protect the identity of the client for whom he had purchased the work. Fortunately, however he agreed to forward a letter to the purchaser, and when Martin Gardner wrote to the anonymous owner, he received a reply from Norman Armour, Jr. of New York. Armour gave Gardner a copy of the episode”. (NZ Listener)

Although it is certain that there once was an episode called ‘A Wasp in a Wig’, some people think that the text that turned up in the galley proofs is a fake, because they feel the writing doesn’t live up to the quality of the rest of Lewis Carroll’s writing.

Karoline Leach reminds us that the authenticity of the galley proofs has never been established, for example by analyzing the paper, ink and handwriting, and we are therefore not 100% sure that Lewis Carroll actually wrote this chapter.

Selwyn Goodacre doubts the authenticity of the autograph corrections. He concludes that “the weight of the evidence is that the proofs are genuine, but that the corrections show some signs of another hand ‘sophisticating’ the item”. (Jaques & Gidders 48)

For further reading about this discussion about fake of not fake, read Matthew Demakos’ article “The authentic wasp” in Knight Letter nr. 72.

…and she was just going to spring over, when she heard a deep sigh, which seemed to come from the wood behind her.

“There’s somebody very unhappy there,” she thought, looking anxiously back to see what was the matter. Something like a very old man (only that his face was more like a wasp) was sitting on the ground, leaning against a tree, all huddled up together, and shivering as if he were very cold.

“I don’t think I can be of any use to him,” was Alice’s first thought, as she turned to spring over the brook: – “but I’ll just ask him what’s the matter,” she added, checking herself on the very edge. “If I once jump over, everything will change, and then I can’t help him.”

So she went back to the Wasp – rather unwillingly, for she was very anxious to be a queen.

“It’s rheumatism, I should think,” Alice said to herself, and she stooped over him, and said very kindly, “I hope you’re not in much pain?”

The Wasp only shook his shoulders, and turned his head away. “Ah deary me!” he said to himself.

“Can I do anything for you?” Alice went on. “Aren’t you rather cold here?”

“How you go on!” the Wasp said in a peevish tone. “Worrity, Worrity! There never was such a child!”

Alice felt rather offended at this answer, and was very nearly walking on and leaving him, but she thought to herself “Perhaps it’s only pain that makes him so cross.” So she tried once more.

“Won’t you let me help you round to the other side? You’ll be out of the cold wind there.”

The Wasp took her arm, and let her help him round the tree, but when he got settled down again he only said, as before, “Worrity, worrity! Can’t you leave a body alone?”
“Would you like me to read you a bit of this?” Alice went on, as she picked up a newspaper which had been lying at his feet.

“You may read it if you’ve a mind to,” the Wasp said, rather sulkily. “Nobody’s hindering you, that I know of.”

So Alice sat down by him, and spread out the paper on her knees, and began. “Latest News. The Exploring Party have made another tour in the Pantry, and have found five new lumps of white sugar, large and in fine condition. In coming back – ”

“Any brown sugar?” the Wasp interrupted.

Alice hastily ran her eyes down the paper and said “No. It says nothing about brown.”

“No brown sugar!” grumbled the Wasp. “A nice exploring party!”

“In coming back,” Alice went on reading, “they found a lake of treacle. The banks of the lake were blue and white, and looked like china. While tasting the treacle, they had a sad accident: two of their party were engulped – ”

“Where what?” the Wasp asked in a very cross voice.

“There’s no such word in the language!” said the Wasp.

“It’s in the newspaper, though,” Alice said a little timidly.

“Let’s stop it here!” said the Wasp, fretfully turning away his head.

Alice put down the newspaper. “I’m afraid you’re not well,” she said in a soothing tone. “Can’t I do anything for you?”

“It’s all along of the wig,” the Wasp said in a much gentler voice.

“Along of the wig?” Alice repeated, quite pleased to find that he was recovering his temper.

“You’d be cross too, if you’d a wig like mine,” the Wasp went on. “They jokes, at one. And they worrits one. And then I gets cross. And I gets cold. And I gets under a tree. And I gets a yellow handkerchief. And I ties up my face – as at the present.”

Alice looked pityingly at him. “Tying up the face is very good for the toothache,” she said.

“And it’s very good for the conceit,” added the Wasp.

Alice didn’t catch the word exactly. “Is that a kind of toothache?” she asked.

The Wasp considered a little. “Well, no,” he said: “it’s when you hold up your head – so – without bending your neck.”

The Wasp said “That’s a new-fangled name. They called it conceit in my time.”

“Conceit isn’t a disease at all,” Alice remarked.

“It is, though,” said the Wasp: “wait till you have it, and then you’ll know. And when you catches it, just try tying a yellow handkerchief round your face. It’ll cure you in no time!”

He untied the handkerchief as he spoke, and Alice looked at his wig in great surprise. It was bright yellow like the handkerchief, and all tangled and tumbled about like a heap of sea-weed. “You could make your wig much neater,” she said, “if only you had a comb.”

“What, you’re a Bee, are you?” the Wasp said, looking at her with more interest. “And you’ve got a comb. Much honey?”

“It isn’t that kind,” Alice hastily explained. “It’s to comb hair with – your wig’s sovery rough, you know.”

A curious idea came into Alice’s head. Almost every one she had met had repeated poetry to her, and she thought she would try if the Wasp couldn’t do it too. “Would you mind saying it in rhyme?” she asked very politely.

“It aint what I’m used to,” said the Wasp: “however I’ll try; wait a bit.” He was silent for a few moments, and then began again –

“When I was young, my ringlets waved
And curled and crinkled on my head:
And then they said ‘You should be shaved,
And wear a yellow wig instead.’

But when I followed their advice,
And they had noticed the effect,
They said I did not look so nice
As they had ventured to expect.

They said it did not fit, and so
It made me look extremely plain:
But what was I to do, you know?
My ringlets would not grow again.

So now that I am old and grey,
And all my hair is nearly gone,
They take my wig from me and say
‘How can you put such rubbish on?’

And still, whenever I appear,
They hoot at me and call me ‘Pig!’
And that is why they do it, dear,
Because I wear a yellow wig.”

“I’m very sorry for you,” Alice said heartily: “and I think if your wig fitted a little better, they wouldn’t tease you quite so much.”

“Your wig fits very well,” the Wasp murmured, looking at her with an expression of admiration: “it’s the shape of your head as does it. Your jaws aint well shaped, though – I should think you couldn’t bite well?”

Alice began with a little scream of laughing, which she turned into a cough as well as she could. At last she managed to say gravely, “I can bite anything I want,”

“Not with a mouth as small as that,” the Wasp persisted. “If you was a-fighting, now – could you get hold of the other one by the back of the neck?”

“Well, that’s because your jaws are too short,” the Wasp went on: “but the top of your head is nice and round.” He took off his own wig as he spoke, and stretched out one claw towards Alice, as if he wished to do the same for her, but she kept out of reach, and would not take the hint. So he went on with his criticisms.

“Then, your eyes – they’re too much in front, no doubt. One would have done as well as two, if you must have them so close – ”

Alice did not like having so many personal remarks made on her, and as the Wasp had quite recovered his spirits, and was getting very talkative, she thought she might safely leave him. “I think I must be going on now,” she said. “Good-bye.”

“Good-bye, and thank-ye,” said the Wasp, and Alice tripped down the hill again, quite pleased that she had gone back and given a few minutes to making the poor old creature comfortable.