One of the most famous poems from the Alice books is “Jabberwocky”: 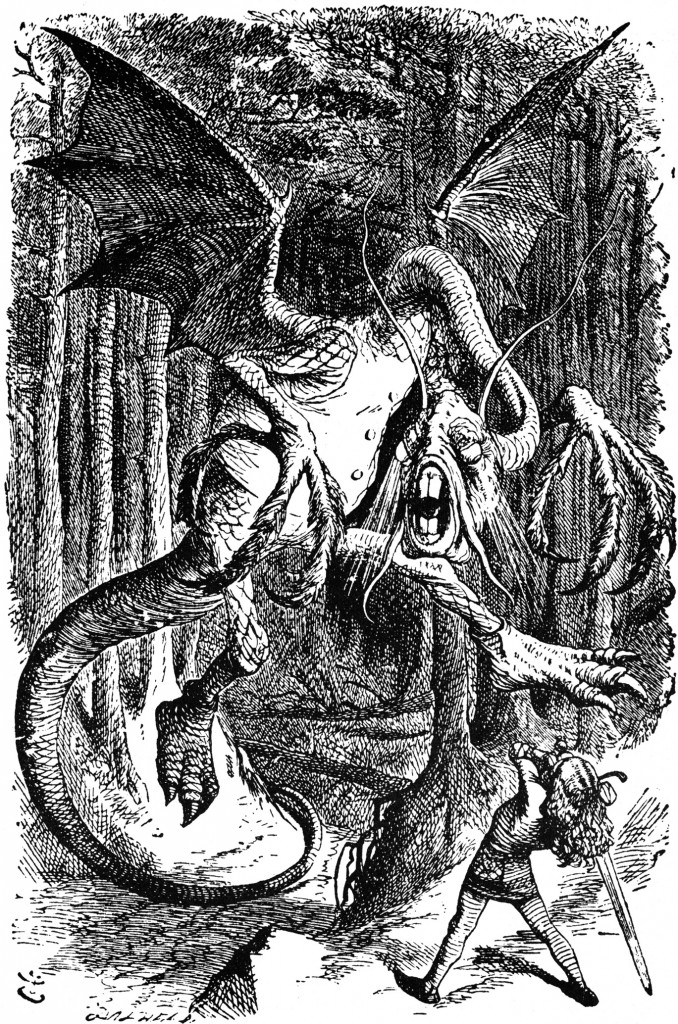 ‘Twas brillig, and the slithy toves
Did gyre and gimble in the wabe;
All mimsy were the borogoves,
And the mome raths outgrabe.

“Beware the Jabberwock, my son!
The jaws that bite, the claws that catch!
Beware the Jubjub bird, and shun
The frumious Bandersnatch!”

He took his vorpal sword in hand:
Long time the manxome foe he sought —
So rested he by the Tumtum tree,
And stood awhile in thought.

And as in uffish thought he stood,
The Jabberwock, with eyes of flame,
Came whiffling through the tulgey wood,
And burbled as it came!

One, two! One, two! And through and through
The vorpal blade went snicker-snack!
He left it dead, and with its head
He went galumphing back.

“And hast thou slain the Jabberwock?
Come to my arms, my beamish boy!
O frabjous day! Callooh! Callay!”
He chortled in his joy.

‘Twas brillig, and the slithy toves
Did gyre and gimble in the wabe;
All mimsy were the borogoves,
And the mome raths outgrabe.

The poem makes a lot of use of ‘portmanteaus’: a word that is made up of other words.

In the book, the first stanza of the poem is actually printed in mirrored font, but the whole poem is printed in normal font on the next page. Carroll may have considered printing it mirrorred in full, but abandoned the idea because it would become too costly. In 1868 he wrote to his publisher: “Have you any means, or can you find any, for printing a page or two in the next volume of Alice in reverse?”, and Macmillan responded that it would cost a great deal more to do so.

How and when Jabberwocky was written

Dodgson made up the poem long before he published it in “Through the Looking-Glass and what Alice found there”. The first verse was also made up years before the rest of the poem.

The first stanza of the poem originally appeared in a 1855 edition of Mischmasch, a periodical that Carroll wrote and illustrated himself as a boy, for the amusement of his family. Carroll called it “Stanza of Anglo-Saxon Poetry” (Gardner, “The Annotated Alice”).

The meaning of the words was a little different from Humpty Dumpty’s explanations in “Through the Looking-Glass”. Carroll explained in Mischmasch that the individual words meant the following:

“Hence the literal English of the passage is:
“It was evening, and the smooth active badgers were scratching and boring holes in the hill side; all unhappy were the parrots, and the grave turtles squeaked out“.

There were probably sun dials on the top of the hill, and the “borogoves” were afraid that their nests would be undermined. The hill was probably full of the nests of “raths”, which ran out squeaking with fear on hearing the “toves” scratching outside. This is an obscure, but yet deeply affecting, relic of ancient Poetry.

Carroll added the other verses a few years later during a verse-making game with his cousins.

Other explanations of the words

When publishing the complete poem in ‘Through the Looking-Glass’, Carroll had Humpty Dumpty explain it to Alice. Humpty Dumpty tells her the words mean the following:

Carroll was often asked to explain the poem further. In a letter to child friend Maud Standen (1877) he wrote:

“I am afraid I can’t explain ‘vorpal blade’ for you – nor yet ‘tulgey wood’, but I did make an explanation once for ‘uffish thought’! It seemed to suggest a state of mind when the voice is gruffish, the manner roughish, and the temper huffish. Then again, as to ‘burble’ if you take the three verbs ‘bleat, murmur, and warble‘ then select the bits I have underlined, it certainly makes ‘burble’ though I am afraid I can’t distinctly remember having made it in that way.”

In the preface of ‘The Hunting of the Snark’, Carroll also explains of which words the word ‘frumious’ consists:

Around 1883 he also gave an explanation for the name ‘Jabberwock’, when a class in the Girls’ Latin School in Boston asked Carroll’s permission to name their school magazine ‘The Jabberwock’. He replied:

According to Martin Gardner (Gardner, “The Anniversary Edition” 181), the word ‘whiffling’ is not a Carrolian word. It had a variety of meanings in his time, but usually referred to ‘blowing unsteadily in short puffs’, and therefore it became a slang term for being variable and evasive. In an earlier century ‘whiffling’ meant smoking and drinking.

‘Tum-tum’ apparantly was Victorian slang for the sound of a stringed instrument, when monotonously strummed.

The word ‘burble’ had long been used in England as a variant of ‘bubble’. Also, the word meant ‘to perplex, confuse, or muddle’.

Also the word ‘beamish’ was not invented by Carroll. The Oxford English Dictionary traces it back to 1530 as a variant of ‘beaming’, meaning ‘shining brightly, radiant’.

Carroll’s made-up word ‘galumphing’ has entered the Oxford English Dictionary. It is attributed to Carroll and is defined as a combination of ‘gallop’ and ‘triumphant’, meaning ‘to march on exultantly with irregular bounding movements’.

Also the word ‘chortled’ made its way into this dictionary, where it is defined as ‘a blend of chuckle and snort’.

In the preface to ‘Through the Looking-Glass’, Carroll also gave some instructions for the pronunciation of the words:

“The new words, in the poem Jabberwocky (see p. 202), have given rise to some differences of opinion as to their pronunciation: so it may be well to give instructions on that point also. Pronounce ‘slithy’ as if it were the two words ‘sly, the’: make the ‘g’ hard in ‘gyre’ and ‘gimble’: and pronounce ‘rath’ to rhyme with ‘bath’.”

In his preface to ‘The Hunting of the Snark’, Carroll writes:

This word is also often being mispronounced or misspelled as ‘borogroves’

Is Jabberwocky a parody?

It is unclear whether ‘Jabberwocky’ is a parody of an earlier poem.

Roger Green (Green) suggests that Carroll may have had in mind a long German ballad called ‘The Shepherd of the Giant Mountains’. The ballad tells the story of how a young shepherd slays a monstrous Griffin. Carroll’s cousin, Manella Bute, translated this poem and published it in ‘Sharpe’s London Magazin’ (March 7 and 21, 1846).

The similarity between the ballad and ‘Jabberwocky’ is not very clear. According to Green, it is ‘much in the feeling and the atmosphere; the parody is of general style and outlook’.