To celebrate the 150th anniversary of “Through the Looking-Glass”, the Lewis Carroll Society is launching a writing competition!

The challenge: Write a ‘missing’ chapter for either “Alice’s Adventures in Wonderland” or “Through the Looking-Glass and what Alice found there”.

Prizes: £100 for the winners of each of the three age groups (0-16 years, 16-20 year, 20+ years old), as well as Chris Riddell’s “Through the Looking Glass and What Alice Found There” book for the winners and runners-ups.

There are several shops completely dedicated to Alice in Wonderland products – and not just in the United Kingdom! If you’re in one of the area’s mentioned below, be sure to pay those shops a visit.

The most famous Alice in Wonderland shop is of course the souvenir shop in Oxford, which was actually encorporated into ‘Through the Looking Glass’! The little shop is literally stuffed to the brim with all kinds of Alice in Wonderland souvenirs. It is located directly in front of Christ Church, where Lewis Carroll and Alice lived, so you can combine a visit to these historical and fun places!

END_OF_DOCUMENT_TOKEN_TO_BE_REPLACED

Posted in Other
7 comments: Leave a reply

Are you an artist? Then you may want to join the ‘Wasp in a Wig challenge’: produce an image, in any media, of the Wasp character from the dismissed Through the Looking Glass chapter “A Wasp in a Wig”.

“A Wasp in a Wig” was a chapter in Through the Looking Glass that never made it into the published book. Illustrator John Tenniel thought it wasn’t interesting enough and ‘couldn’t see his way into a picture’. Lewis Carroll then decided to drop the entire episode from the book.

Larissa Averbug, a Brazilian graphic designer and researcher in children’s literature, is currently working on her PhD research, titled “The Multiple Faces of Alice: An Irreversible Creative Dynamic”. The intent is “to investigate, in practice, the creative thinking of contemporary visual artists from distinct media through a ludic experiment”. For her research she is challenging artists to create the Wasp character in any media they like. The challenge might also result in an exhibition and a book for collectors.

If you want an invitation to join the challenge, send Larissa an email: [email protected].

Four original electrotyped plates, used for printing illustrations for the first edition of “Alice’s Adventures in Wonderland” and “Through the Looking Glass”, have turned up during a garage sale in Bungay, Suffolk (UK).

According to Hull Daily Mail and Metro News (where I got the photo’s from), a man called Paul Searle unknowingly bought the plates as part of a lot of ‘junk’ during a garage sale, while actually looking for glass bottles for his collection.

According to mr. Searle, he wanted to ‘preserve them in history’ and see them returned to their ‘rightful home’. Hull Daily Mail mentions he ‘sold them to a book shop for an undisclosed fee’ but in their article title a sum of £5,000 is mentioned.

The book shop in question is Blackwell bookstore in Oxford. I called them to verify the information in the linked articles, because they are not very clear. The lot apparently contained two (not four) plates used to print the first edition of Alice’s Adventures in Wonderland (the Hatter holding a tea cup and slice of bread, and Father William doing a somersault), and two plates used to print the first edition of Through the Looking Glass and what Alice found there (Haigha and Hatta with the fighting Lion and Unicorn in the back, and Alice standing at the ‘Queen Alice’ door with the frog). 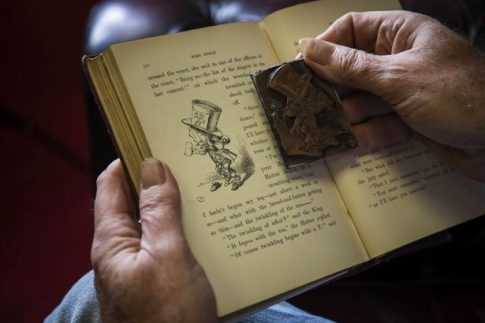 END_OF_DOCUMENT_TOKEN_TO_BE_REPLACED

Did you know there is going to be a live-action fantasy drama movie, written as a prequel to both ‘Alice in Wonderland’ and ‘Peter Pan’? It is called ‘Come Away’ and tells us that Alice and Peter Pan are siblings!

Two years ago it was already announced that Brenda Chapman was going to produce the movie. Now, it is confirmed that Angelina Jolie and David Oyelowo are in negotiations to play the roles of Alice and Peter.

The premise of the film, according to Deadline.com: “Before Alice went to Wonderland, and before Peter became Pan, they were brother and sister. When their eldest brother dies in a tragic accident, they each seek to save their parents from their downward spirals of despair until finally they are forced to choose between home and imagination, setting the stage for their iconic journeys into Wonderland and Neverland.”

Not much else is known about the story so far, so I’m very curious to see how it will turn out. The main question is of course: will lovers of Carroll’s ‘Alice’ tales enjoy this movie, or will we cringe again like we did when watching Disney’s live-action abominations from 2010 and 2016…?

Posted in Other
2 comments: Leave a reply

Pretty images and merchandise with quotes attributed to Lewis Carroll or the Alice in Wonderland books are popping up everywhere nowadays. Unfortunately, many of these quotes are misattributed: they are not from the ‘Alice’ books, nor from their author. Please don’t spread the misconception!

The internet is a blessing, but it also has a downside: funny, entertaining, motivational or spiritual quotes are shared with the speed of light, without anyone checking the reliability of the source.

People with commercial goals in mind, profit from this. They create merchandise with these quotes in the hopes that you buy them. Or they create nice looking images with quotes and post them on their social media page, hoping to get a lot of likes and shares, so their page becomes more valuable to advertisers.

END_OF_DOCUMENT_TOKEN_TO_BE_REPLACED

Posted in Other
39 comments: Leave a reply

Christ Church Library has a very nice collection with among others Lewis Carroll / Alice in Wonderland related material. Currently they are in the process of digitizing their material. A large part of the collection can already be found online.

Part of their online catalogue is dedicated to Lewis Carroll, and this section contains a subsection with material related to the creation of the ‘Alice’ books. The latter contains high-resolution scans with detailed descriptions of amongst others: