The Dutch Lewis Carroll Society has published a facsimile of “Lize’s Avonturen in het Wonderland” – the first Dutch translation of “Alice’s Adventures in Wonderland”.

END_OF_DOCUMENT_TOKEN_TO_BE_REPLACED

Now for auction at Christies: a copy of “Alice’s Adventures in Wonderland” from 1866!

END_OF_DOCUMENT_TOKEN_TO_BE_REPLACED

For all of those who always wanted a first edition of “Through the Looking Glass”: there now is a relatively affordable copy available through eBay.

The book is a first edition from 1872, from the second print run (‘fourteenth thousand’). It is not in a super good state.

END_OF_DOCUMENT_TOKEN_TO_BE_REPLACED 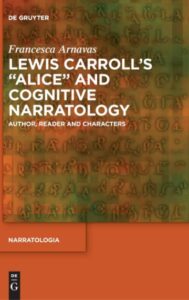 Her book proposes a dialogue between the ‘Alice’ books, and a cognitive narratological approach to literary texts. Both ‘Alice’ books are analysed through new theoretical lenses, using concepts taken from the cognitive sciences to explore the minds of the author, the readers and the characters.

END_OF_DOCUMENT_TOKEN_TO_BE_REPLACED

On 24 June, three presentation copies of Carroll’s books will be auctioned at Bonham’s.

May I proudly present to you: my very own book, “Alice’s Adventures under Water”! It’s a sequel to “Alice’s Adventures in Wonderland” and “Through the Looking-Glass and what Alice found there”, in which I’ve tried to mimic Carroll’s style as best as possible.

I have been considering writing my own version for years and I finally felt it was time to give it a try.

Sequels to the ‘Alice’ books have been published before, but I must admit that I was often a bit disappointed in them, as I always felt something was missing. Either the writing style did not feel very Carrollian, or the story contained little to no poetry, or the puns and jokes were not up to standard, or there were no hidden references, or other characteristic Carrollian elements were missing. It may be arrogant, but I thought that, even though English is not my native language, with all my background knowledge I surely could do better?

So here it is: another ‘Alice’ story in which she encounters silly characters in silly situations, this time in and under-water world. I’ve put in jokes, puns, and poetry, as well as more or less obscure references to well known people, politics, poems and songs, and mathematics. I also tried to incorporate into my story other specific elements that one can find in Carroll’s ‘Alice’ stories, like his particular use of punctuation, exactly 12 chapters, the covert return of the Hatter and the March Hare, and more. And as all good books must have pictures, it contains exactly 42 illustrations in the style of John Tenniel, skilfully drawn by the talented Robert Louis Black!

The book is now available for purchase. You can order it directly from me through this website, but you can also find it at Amazon and other online bookstores, or order a copy from your local bookseller.

Do you want to know more about the chess game that forms the framework of “Through the Looking Glass and what Alice found there”? Then get this booklet, written by Rev. Ivor Davies, who had an interest in both chess and Lewis Carroll.

Reverend Davies’ interest in Lewis Carroll led him to write several articles about the chess game in ‘Through the Looking Glass’. These articles have now been bundled and republished by the Clergy Correspondence Chess Club, which Davies founded, in a book called “The Chess Player’s Alice”.