Although the Alice in Wonderland story is most often associated with crazyness, it can be turned into a scary theme as well. Make it ‘Malice in Wonderland’! Or for example center it around the Queen of Hearts, who is so fond of beheading people. Yell “Off with your head!!” to everyone who dares to ring your doorbell!

Tim Burton’s live action movie is a little darker than the original story, so you could pick that as a theme. The game “American McGee’s Alice” and its follow-up “Alice: Madness Returns” is even more dark, so this is also a good source of inspiration: 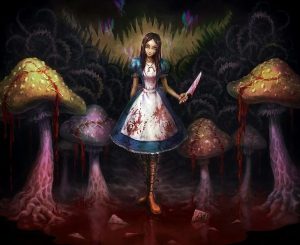 Make autumn wreaths with black and red roses. Partly paint some of the black roses and spill red drops of paint over the wreath. Choose a shade of red that resembles blood.
You can also add an ‘Off with your head’ sign, and skulls from the poor souls who made the Queen angry.

Decorate your doorknob, doorbell, or entire door so it looks like the talking doorknob from Wonderland. Make him look either scared or scary.

Carve or paint an Alice in Wonderland themed pumpkin! 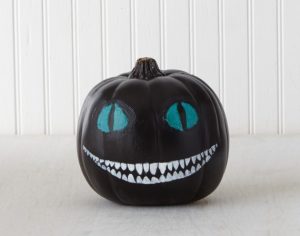 Cut out bat shapes from black paper, add some glitter, and attach a string to them. Or stick them on a tea tray. Hang them on the ceiling. “Twinkle, twinkle little bat… up above the world you fly, like a tea tray in the sky!”

Put a raven on your writing desk.

Hang up Cheshire Cat smiles with very pointy teeth. Or incorporate a crescent moon. You can also draw the smile and eyes with blacklight marker so it glows in the dark!

Draw scary or zombiefied versions of the Wonderland characters and hang them on your walls:

Place giant mushrooms in your front yard. Normal ones will already do fine, but you could make them extra scary by painting faces onto them. Or make them eery by adding battery or solar powered lights, so they glow in the dark.

Also perfect for an Alice in Wonderland Halloween garden: zombie and skeleton lawn flamingo’s! Seriously, they exist. Just add a zombie hedgehog and you can play zombie croquet.

Make a signpost with signs pointing to ‘Going nowhere’, ‘Wrong way’, ‘Go back’, ‘Down the rabbit hole’, ‘We’re all mad there’ and ‘Witch way?’. Attach spiderwebs to them.

Use cardboard to make large scary card soldiers with spears, based on Tim Burton’s movie:

Dress up a skeleton as a Wonderland character. For example a dead Queen of Hearts, or set up a tea party table with a dead Hatter, Hare and Dormouse. Add spiderwebs to the teacups and tea pots on the table, so it looks like they’ve been there a very long time.

Place a broken looking glass on your mantle. Or make a haunted mirror, that shows Alice trying to get through.

What snacks are you going to offer the kids that come trick-or-treating? And what are you and your family members or friends going to eat on Hallow’s Eve?

Mushrooms, lots of mushrooms! Offer the kids real (edible!) mushrooms first. And when they look horrified, hand them candy mushrooms instead. >:-)

Bake cookies in the shape of or with the Cheshire Cat’s grin.

Fill little potion bottles with weird concoctions, or dark red lemonade that looks bloody. Or use red food coloring. Attach a ‘drink me’ label to them.

Drink tea from a cup that has a floating finger, plastic spider, or other scary stuff floating in it. Give the cup a bloody edge. “How about a nice cup of tea?”

And before you send out your kids for trick-or-treat, make them a Cheshire Cat head candy bucket! You can use a standard pumpkin bucket as a base and paint over it, using the vertical stripes as guidelines for alternating pink and purple paint. Then, paint the rest of the face onto the bucket.

In stead of a nice Alice dress, get a zombiefied version of her outfit. Or wear a costume based on American McGee’s Alice game:

Be the Queen of Hearts, who keeps beheading people.

Become a Cheshire Cat with a scary grin.

Or a rabid White Rabbit!

How about going for a playing card, with a skull in stead of a normal head?

Do you know of any more ideas for an Alice in Wonderland Halloween? Leave them in the comments!