Yesterday, a richly illustrated and expanded collector’s edition of Martin Gardner’s The Annotated Alice was released. This deluxe edition celebrates the 150th anniversary of Alice’s Adventures in Wonderland. 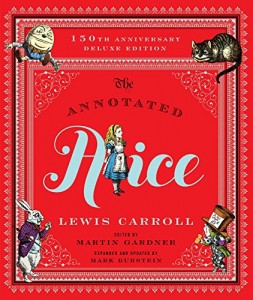 The Anniversary Deluxe Edition of this well-known ‘Alice bible’ compiles over half a century of scholarship by leading Carrollian experts to reveal the history and full depth of the Alice books and their author.

This volume brings together Martin Gardner’s legendary original 1960 publication, The Annotated Alice; his follow-ups, More Annotated Alice and the Definitive Edition; his continuing explication through the Knight Letter magazine; and masterly additions and updates edited by Mark Burstein, president emeritus of the Lewis Carroll Society of North America. This anniversary edition of The Annotated Alice is therefore the most comprehensive collection of Alice materials ever published in a single volume.

The deluxe anniversary edition includes amongst others:

You can order the book via my webshop or directly at Amazon.com.